The South Carolina Department of Archives and History (SCDAH) recently completed a multi-year project to conserve the state constitutions of South Carolina.  The first state constitution was written and adopted in March of 1776, and new constitutions were written and adopted in 1778, 1790, 1861, 1865, 1868, and 1895. These constitutions were written on a variety of different materials, including paper (1776, 1778, 1865), bound volumes (1868, 1895), vellum (1790), and parchment (1861). The constitutional documents are the written expression of our state sovereignty and as artifacts represent the historical legacy of our state. The different versions over the centuries help illustrate South Carolina’s historical pathway to the present.

Unfortunately, the various constitutions were not always well treated. The early constitutions likely spent time stored in state offices in the heat and humidity of Charleston, but after the Civil War state offices were consolidated in Columbia and the records were stored in the basement of the new (and present-day) State House in Columbia. Although the building contained design elements like brick rooms, for the safe storage of government records, the actual storage conditions were damp, dirty, and unorganized.

In early 1940, state Senator Edgar Brown discovered South Carolina’s 1776 constitution in a poorly kept storeroom.  With the help of Alexander Salley of the state’s Historical Commission, now the SCDAH, most of the other state constitutions were located and transferred to the custody of the Historical Commission for safe storage. The 1776 Constitution was sent to William Barrow for lamination, a preservation technique that was considered cutting edge at the time. The lamination process used heat and rollers to fuse sheets of hemp tissue and cellulose acetate to the original paper. The idea was to strengthen the document and provide protection from dirt and other agents. In the mid-1950s, the SCDAH bought a lamination machine and used the process on many colonial and antebellum documents, including some constitutions. Unfortunately, under certain conditions acetate can begin to deteriorate, releasing acetic acid with a characteristic vinegary odor. The released acetic acid can damage the original paper.  Over time, staff began to worry about the wear and tear on the constitutions from tours and the effects of the lamination process.

After consultations with multiple conservation experts, the SCDAH requested a special appropriation to fund the treatment of the state’s constitutions. The request was granted as part of the FY 2019/2020 supplemental appropriation act, and the Northeast Document Conservation Center (NEDCC) in Boston, MA was chosen to complete the work.

After researching methods to transport valuable documents over long distances, SCDAH staff determined that the state’s air fleet, maintained by the SC Aeronautics Commission, would be the safest and most efficient way to deliver the constitutions.

The staff carefully packed the constitutions in custom housing to protect them on their journey. On February 26, 2019, two staff members accompanied the documents from Columbia Metropolitan Airport to Lawrence (MA) Municipal Airport aboard a Hawker Beechcraft King Air C90. 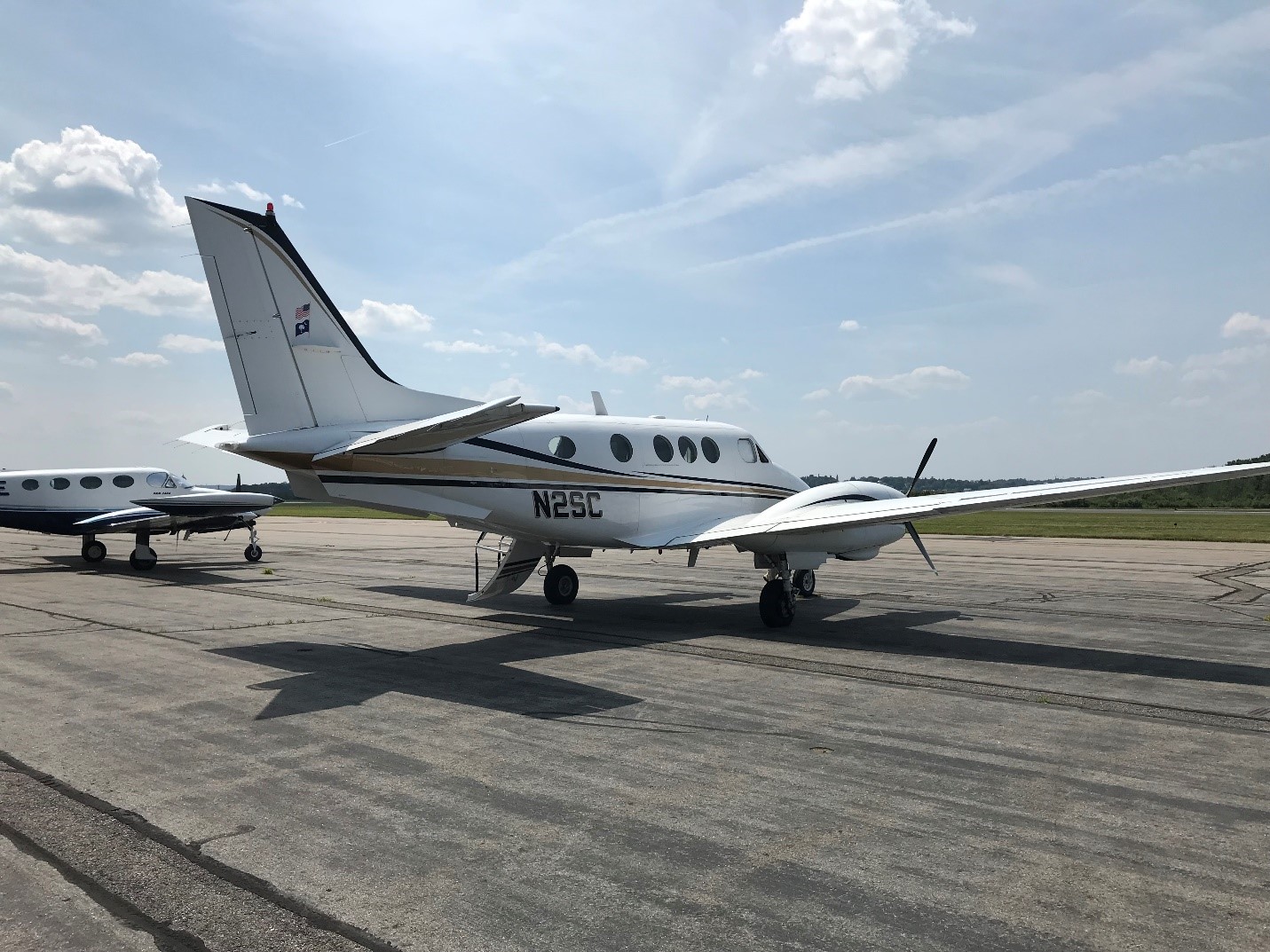 Once the constitutions arrived, NEDCC staff began work almost immediately. The NEDCC’s proposal had laid out a treatment plan for each document. The first step was a thorough assessment of the constitutions, including testing of the solubility and stability of the inks and the pH level of the paper. Regular communications with Katie Boodle, the primary conservator in the project, kept the agency updated on the status of each constitution as it moved through the treatment stage and allowed NEDCC and the agency to make modifications to the treatment plan as issues or problems arose.

The primary treatment for most of the paper constitutions involved delamination, a process in which the leaves are immersed in a bath of acetone to soften and allow the acetate and tissue to be removed. This was not without risks. The red ink used as a decorative element on several of the constitutions was highly soluble in acetone and immersion could potentially dissolve the red ink or cause it to feather into surrounding paper fibers. After extensive testing to determine the risks, NEDCC staff determined that delamination could be performed effectively without damaging the constitutions.

Following delamination, NEDCC staff used multiple conservation techniques to stabilize and preserve the documents. These tasks included dry cleaning to remove dirt from the individual leaves, bathing the documents in water and ethanol to reduce staining and discoloration, pH testing to determine if alkalization was needed, mending tears with Japanese tissue paper and wheat starch paste, and filling large loss areas with special toned paper filler. Several of the constitutions were lined with Japanese paper on the back sides of the documents to give them added strength. Additionally, the 1861 and 1868 constitutions required special mold treatment. Although tests indicated that the mold was not active, the NEDCC determined that it could be removed through surface cleaning and vacuuming. They also applied a water/ethanol solution to the documents to impede future mold activation. 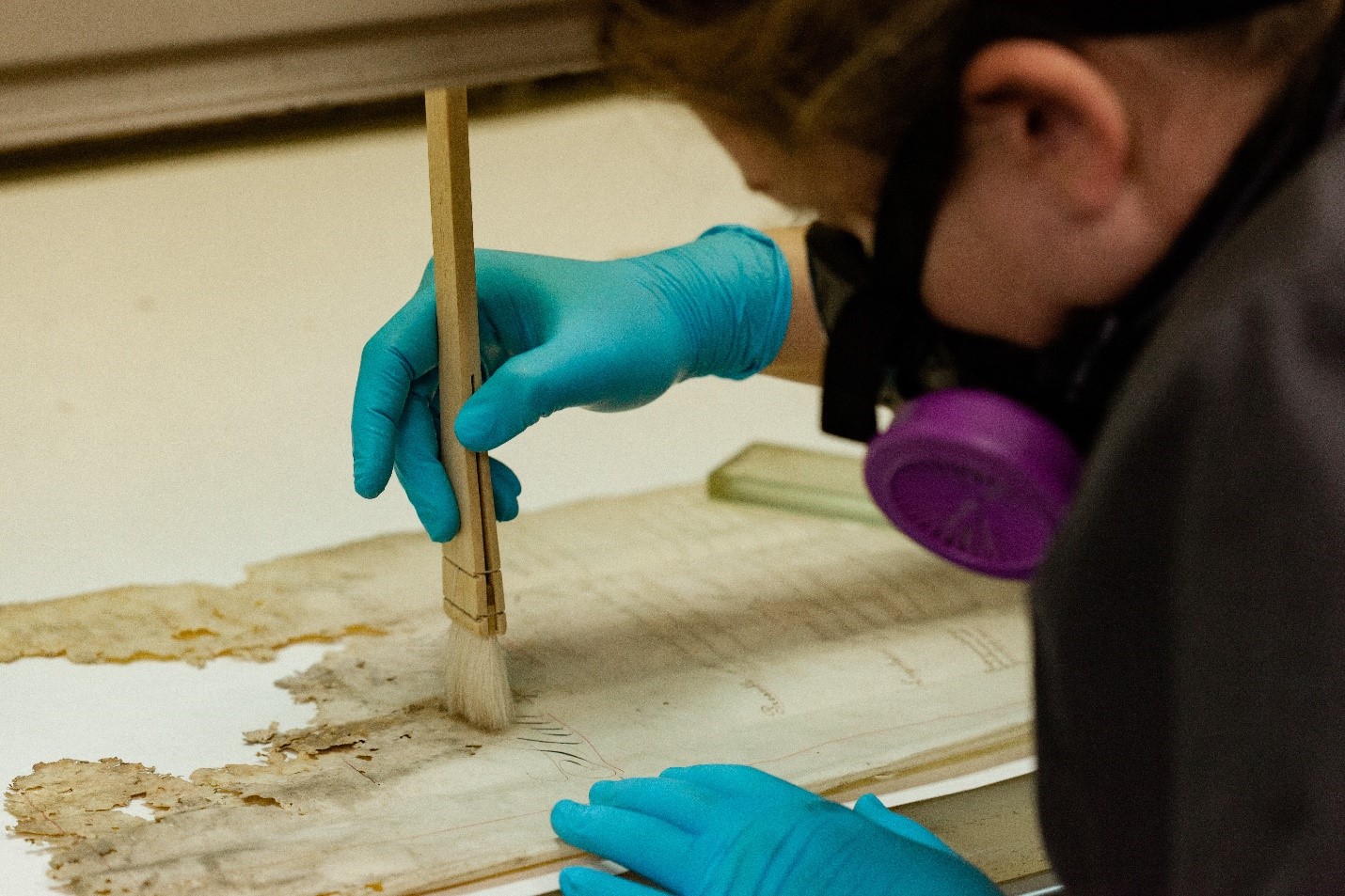 The 1790 constitution required special treatment because it was written on several large pieces of vellum, which is animal skin, typically calf or lamb.  Over the years, the animal skin had dried with numerous wrinkles across the leaves as well as several large creases from prior folding that would not permit the document to sit flat. Typical humidification techniques do not work with vellum because of the inconsistency of the animal skins. NEDCC staff used localized humidification and pressing to reduce the tenting associated with large creases. While it did not completely flatten the individual leaves, it did reduce the problem and provide for easier housing.  The document was carefully cleaned with damp cotton swabs

By the end of May, the conservation treatments had been completed. The month of June was spent constructing the custom archival housing for each constitution. In the case of the 1790 constitution, three boxes were constructed to house the 5 pieces of vellum. As the project wound down, SCDAH staff began planning the retrieval of the documents.  The new housing would require more space for the return trip. After consultations with the Aeronautics Commission, staff determined that the constitutions would fit horizontally if some seats were removed from the plane. On the morning of July 10, two Archives staff members flew to Massachusetts and retrieved the constitutions.