History of the Department

A Brief History of the Department

Recording its actions and the actions of its citizens is an integral function of government. From the colony's beginning in 1670, South Carolina's public officials safeguarded government records, usually conscientiously and sometimes with great courage and personal sacrifice. The state did not institute a separate official program to care for its records, however, until the early twentieth century. In 1905, the legislature made the Historical Commission of the State of South Carolina responsible for the state's archives and authorized it to hire a full-time secretary to take custody of the non-current government records that were scattered about the State House.

Alexander Samuel Salley, Jr., served as the Commission's secretary from 1905 until 1949. For many years he labored alone, working out of two cramped rooms in the State House to collect and put in order records that had been left in chaos by the Civil War and its aftermath. In 1906, he produced the first volume in what would become an extensive publications program. In 1924, he hired his first assistant, and in 1935, he moved to the World War Memorial Building, which had been erected to honor the veterans of World War I and to serve as a fireproof archives building. As Mr. Salley and a staff that would eventually grow to six brought in more of the government's archives, this building, too, became inadequate.

J. Harold Easterby, with the new title of director, succeeded Mr. Salley in 1949. Dr. Easterby envisioned a modern archival program for South Carolina and before his death on December 29, 1960, he had achieved many of his goals. He began document restoration, transferred massive quantities of colonial and antebellum court records from Charleston, and, as part of an ambitious revamped publications program, began to publish volumes in The Colonial and The State Records of South Carolina series. The 1954 Archives Act codified a professional archival program. Later, a few months before Dr. Easterby died, the program moved into a long-sought new archives building at the corner of Senate and Bull Streets.

Charles E. Lee began his twenty-six year tenure as director in June 1961. Under his administration, the agency broadened its scope. In 1967, the legislature recognized the addition of the federal program for historic preservation and the Department's work with the Confederation of South Carolina Local Historical Societies by renaming the agency the Department of Archives and History. The agency extended its role in the field of government records by adding records management services for state agencies and a comprehensive local government records program. In 1971, the size of the Archives building was doubled. In 1973, the legislature enacted a strong Public Records Act. In 1976, a new State Records Center for the temporary storage of semi-active, recent state agency records was added in a renovated warehouse on Blanding Street, and 10 years later, its records storage space was doubled. In 1987 when Dr. Lee retired, agency staff numbered more than 120, and the program was one of the largest of its kind in the country.

George L. Vogt succeeded Charles Lee as director of the agency on July 1, 1987. During his eight-year tenure, Dr. Vogt emphasized long-range planning and the department’s leadership role in the State Historical Records Advisory Board. The board coordinates efforts to improve conditions for both private and public historical records throughout the state. Budgetary difficulties during these years forced a reduction in the department’s staff to 95 employees and the curtailment of its documentary editing program. Dr. Vogt instituted the Archives and History Foundation to raise private funds in support of the agency’s facilities and programs and led a successful campaign to obtain a badly-needed new state archives building. When Dr. Vogt left to become director of the State Historical Society of Wisconsin in 1995, a $20.5 million Archives and History Center was under construction on Parklane Road eight miles north of center city.

Rodger E. Stroup, became director in early 1997 and continued Dr. Vogt’s emphasis on outreach and added the National History Day program to the department’s activities. The agency’s fifth director, Dr. Stroup oversaw its 1998 move into its fourth home, the Archives and History Center.  Between 2000 and 2004 the agency, along with other core components of state government, saw its budget reduced by over 30% with a corresponding loss of staff and necessitating the closing of the Reference Room on evenings and weekends.

W. Eric Emerson, became the sixth director of the Department in mid 2009 following the retirement of Dr. Stroup.

Rufus Tucker began his career at the Archives Department in April 1960, becoming the agency’s eleventh employee and its first full time African American staff member.  Mr. Tucker worked on the crew that constructed the Archives Building on Senate Street, where he met the department’s director Dr. J. Harold Easterby.  Impressed by his work on the building, Dr. Easterby hired Mr. Tucker to do building maintenance, handle mail, make bank deposits, and ship agency publications.  In 1967, Mr. Tucker began work as a microfilm technician and shortly thereafter became supervisor of the agency’s photocopy shop, a position he held until his retirement in August 1997.  With the mind of an engineer and the hands of a surgeon, Mr. Tucker amazed coworkers with his ability to repair and maintain photocopy machines, microfilm readers, and microfilm cameras.  With grace and dignity, Rufus Tucker was the Jackie Robinson of the Archives and History Department.

Charles Smith joined the agency in 1972 as a records analyst, becoming the first African American hired for a professional staff position.  A native of Gaffney, Mr. Smith came to the Archives with a history degree from Barber-Scotia College.  His parents served as civil rights leaders in Lancaster County, and Mr. Smith was one of the first African American students to graduate from the previously all white Lancaster High School.  Mr. Smith spent his career at the Archives helping state agencies to inventory, schedule, and manage their records.  In 1982, he became supervisor of the State Records Management Program and worked diligently to identify, preserve and transfer permanently valuable records to the Archives.  After thirty years of service, Charles Smith retired from the department in 2002.

Theresa Montgomery joined the agency in 1972 as a records analyst for the County Records Division, becoming the first African American female hired by the department.  A native of Columbia, Ms. Montgomery graduated from C.A. Johnson High School and Benedict College with a degree in social work.  Ms. Montgomery worked in Local Records from 1972-1981, as a processing archivist from 1981-1989, and as Conservation Lab supervisor from 1990-2001.  As leader of the conservation team, Ms. Montgomery’s duties included managing all laboratory work, overseeing holdings maintenance for the archival collection, heading the agency’s disaster recovery team, and conducting training workshops.  After 29 years as an advocate for the preservation of South Carolina government records, Theresa Montgomery completed her service to the agency in 2001.

In 1979, Governor Richard W. Riley appointed Elizabeth Hunt Alston as the first African American member of the Archives and History Commission.  A native of Charleston, Ms. Alston earned a history degree from South Carolina State University and Masters and Education Specialist degrees from the Citadel.  Ms. Alston served on the Commission until 1986 and presided as Vice Chair of the board from 1984-1986.  Ms. Alston also assisted the agency as a member of the State Review Board for the National Register of Historic Places from 1980-1994 and as Chair of the Review Board from 1983-1987.  As an educator and historian, Elizabeth Hunt Alston worked as a social studies and historic preservation consultant with schools and professional organizations across the country.

The Palmetto State's Memory:
A History of the South Carolina Department of Archives and History, 1905-1960 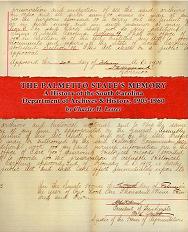 We are pleased to feature The Palmetto State's Memory by Charles H. Lesser (PDF)