Currency of the Bank of the State of South Carolina

The collection holdings of the Dept. of Archives and History are extensive and ever-growing.  Many of the series held by the agency require preservation and conservation work and are often long-term projects. A current project is a collection of currency notes from the Bank of the State of South Carolina.

The bank, chartered in 1812, provided a stable currency for South Carolina during most of its fifty-six years of operation.  Economic collapse at the end of the Civil War ruined the bank, and in 1868 it was officially closed by an act of the General Assembly.  Notes issued by the bank before December 20, 1860 were declared redeemable for twenty year state bonds. These notes were destroyed after their redemption.  The notes that were issued post-secession were declared worthless until a new act passed in 1879 stipulated that outstanding notes could be exchanged for bonds at half value.

Over $770,000 in bank notes were turned in between the beginning of 1880 and July 1, 1881.  These notes were counted, cancelled by a metal punch, certified and bundled.  This currency was to be destroyed but charges of fraud and the investigations that followed halted this process.  The notes were stored in the basement of the State House until 1961 when the 40 boxes of notes were transferred to the Department of Archives and History.

Notes that have not yet been processed are typically bundled in packages of varying size and often come with a document that certifies the amount of currency in the bundle. 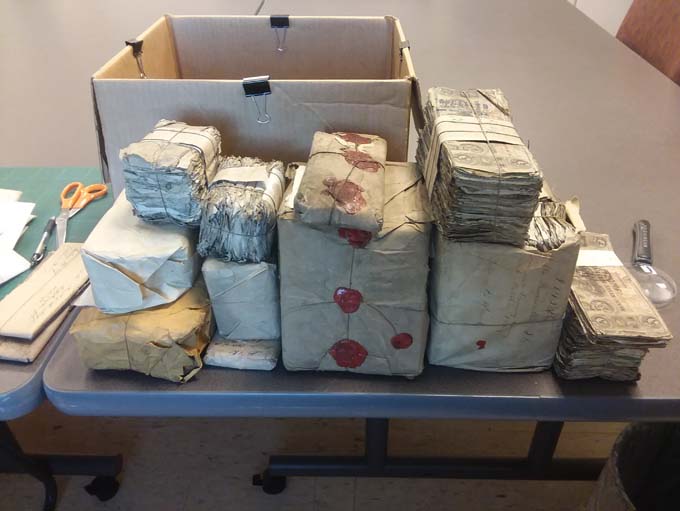 The bundles often contain certificates and correspondence along with the currency. The documents and any packaging materials that contain relevant information are retained permanently in the Archives collection to provide documentation of the currency redemption.  As the documents are removed from the bundles, the material is humidified, flattened and any paper tears are mended before the material is foldered and filed.  The currency is now being processed in our conservation lab.

The currency, itself, is being sorted by Dr. Jack Meyer, a retired University of South Carolina history professor.  He currently volunteers as a conservator with the SC State Museum and the SC Confederate Relic Room and Military Museum. He has spent the last few years working through the collection to sort the notes by quality and type using the numbering system established in South Carolina Obsolete Notes and Scrip, by Austin M. Sheheen, Jr. He has also identified rare and interesting variations.  Many of the notes also contain handwritten messages, advertisements, drawings and even poems that offer an interesting glimpse into the past.

Here are just a few examples: a poem, dated July 21, 1861, an advertisement for Teetotal Restaurant in Charleston, and a message soliciting votes.

Once sorted, the notes are cleaned, flattened and placed in mylar sleeves. Several complete sets of the notes found, including all rare varieties, are being retained by the Archives to document the bank’s currency.  Because of the number of notes found, extra notes are being offered for sale in our gift shop through a special proviso of the General Assembly.  Especially high quality notes may also be sold at auction in the future. 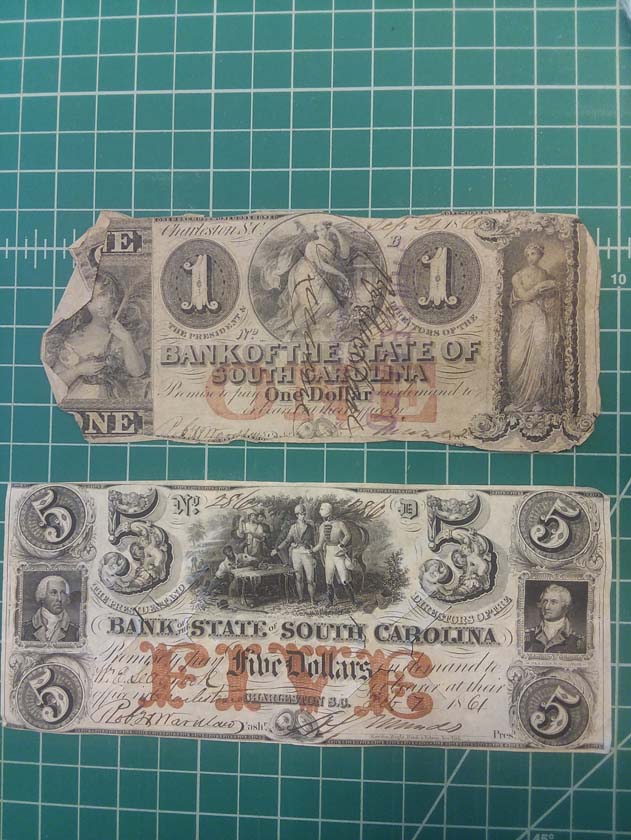